The Finnish Meteorological Institute has issued a report helping UPM to predict the future physical impacts of climate change on its business. While acknowledging the risks, the report confirms that there are also opportunities as the world shifts to a low-carbon economy.

From the nature point of view, the impacts, such as heavy rainfall, storms and drought will be the biggest extremes all across the world. We need science to help us prepare for this.

Read about adapting to climate change

It is impossible to accurately estimate the future speed of climate change because this primarily depends on global levels of carbon dioxide emissions in coming decades, explains Ari Venäläinen, Senior Research Scientist at the Finnish Meteorological Institute.

This is why three alternative emission scenarios have been incorporated in the report.

Climate change will have the biggest physical impact on UPM’s business environment in Finland, where temperatures are expected to rise more significantly and rapidly than the world average. The average temperature may rise between 1°C and 6°C in winter and between 1°C and 4°C in summer. Forest growth will likely accelerate. However, weather extremes will intensify.

The spruce-dominated forests of Southern and Central Finland are predicted to be stricken by drought, which in turn increases the risk of forest fires. At the same time, the amount of rainfall in Northern Finland may increase, especially during the winter, which would increase the risk of snow-related damage. In Southern Finland, the warmer and shorter winters would lead to shorter season of sub-zero temperatures, which could increase the difficulty of harvesting trees using heavy forest machinery.

Rising temperatures would also increase the prevalence of pests in forests, one unwelcome example being the European spruce bark beetle, which could wreak widespread destruction at northern latitudes as it currently does in Central Europe.

In Uruguay, the annual average temperature may rise between 0.9°C and 1.8°C. Rainfall is expected to increase during the summer, particularly in the southern hemisphere, which could exacerbate the risk of flooding.

In Eastern China, the annual average temperature may rise by between 1.6°C and 2.7°C. The Finnish Meteorological Institute predicts that the biggest related risk would be the flooding of the River Yangtze due to a potential increase in rainfall.

In Southern Germany, the annual average temperature could rise between 1.6°C and 2.7°C by 2050. The increase of droughts and forest fires due to higher temperatures constitute the biggest risks for forestry. 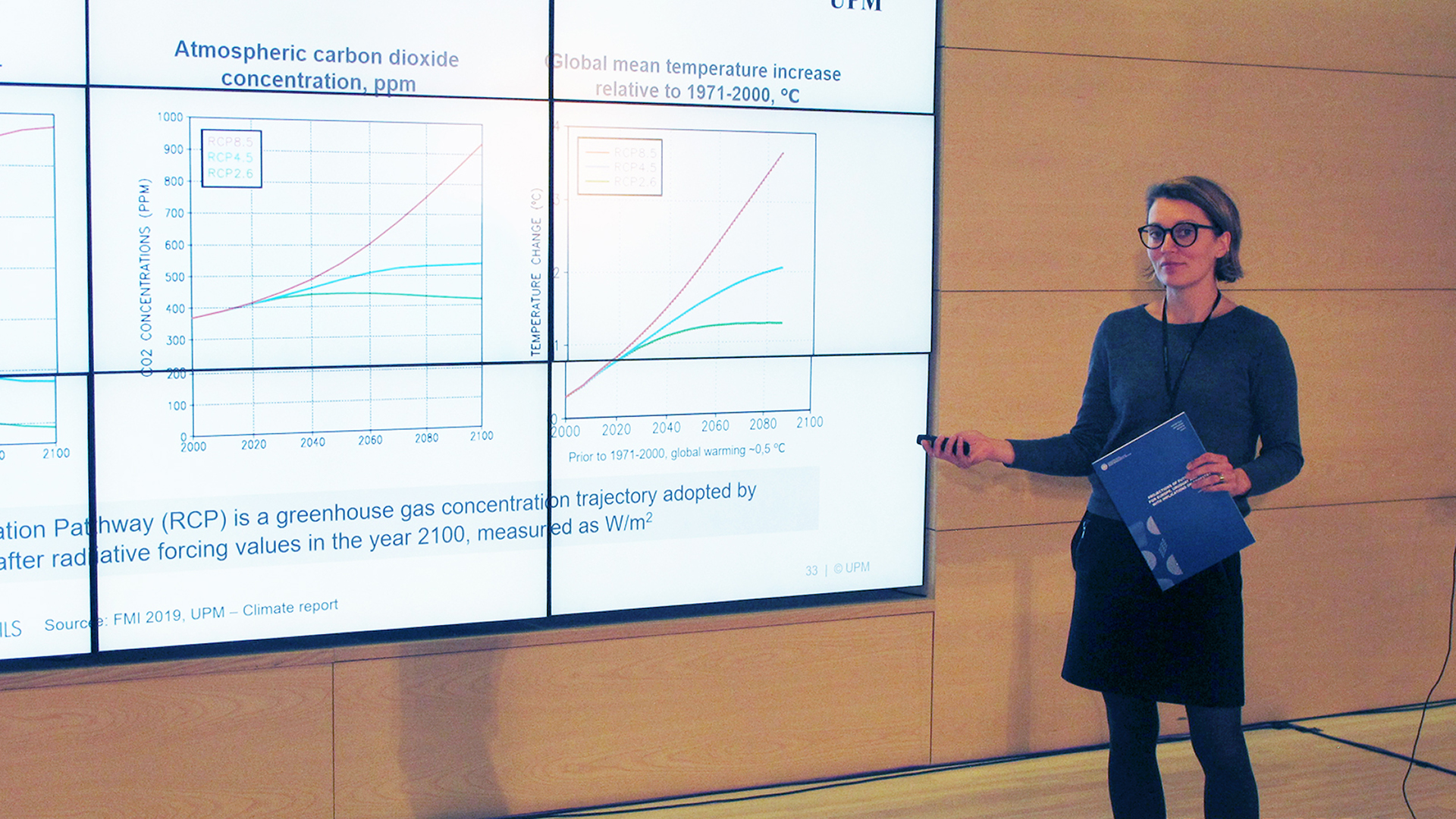 “In addition to looking at the physical impacts of global warming, we want to find out how the shift to a low-emission economy will impact UPM’s business,” states Ruska.

UPM’s products offer a sustainable solution to mitigating climate change as they systematically replace fossil raw materials with bio-based renewable alternatives. The products store carbon dioxide for the entire duration of their lifecycle, even when recycled multiple times.

For decades, UPM has systematically decreased its operational emissions by improving the energy efficiency of its production facilities, and replacing fossil fuels with renewable, emission-free energy sources whenever possible.

Sustainable forestry is the cornerstone of UPM’s climate work, which ensures that the company’s most important raw material sources serve as carbon sinks, storing a significant quantity of carbon dioxide as they grow.

Ruska says that UPM’s views on climate related risks and opportunities will be collated by the end of the year in UPM’s climate scenario analysis, which will form a basis for studying future business options.

“This scenario analysis will also help investors, customers and other stakeholders to assess the company’s prospects in the era of climate change. This is one of the reasons why this report is so essential,” Ruska emphasises.