Engineers and architects have often sought inspiration from nature’s own designs. Light weight and strong, natural structures have an elegance that is seldom found in man-made designs. The honey comb in a bee hive, the cellular structure of a tree trunk or even the fine lattice veins of a leaf: all exhibit strength and lightness of form as well as an economy of material used.

3D printing as a manufacturing method has the potential to produce elements which match the most sophisticated of designs found in nature, and to do so in a cost effective way. The creativity of the designer can be combined with the performance needs of the engineer. In Finland, the Kataja project has been set up to achieve this synthesis with a design called the Leaf Bridge. 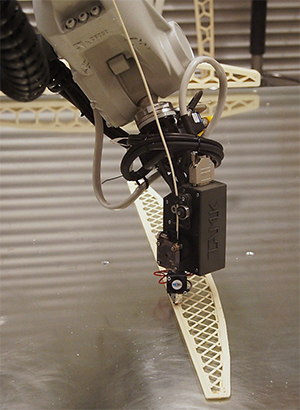 The advantages of UPM Formi 3D over traditional 3D printing materials made it the clear choice as the material for the project. The fine cellulose fibres in the biocomposite material facilitate large scale printing.

Low shrinkage, fast cooling and being self-supporting in the molten stage, enable large elements to be produced efficiently. The same fine cellulose fibres also make UPM Formi 3D the ideal material for small 3D prints, allowing fine details to be produced with even the smallest of nozzles. Additionally its light colour and matte wood-like texture mean that UPM Formi 3D is an excellent alternative to more coarse wood fibre based materials as well as the less natural looking pure PLA filaments. PLA is a biodegradable and bioactive polyester derived from renewable resources.

The development of large scale 3D printing in construction is over a decade old. The first 3D-print house was manufactured in China already in 2008. Since then, large-scale 3D printing has taken great strides, and promises more in the near future in both materials and process. Pekka Ketola, CEO, 3DStep Oy, believes that 3D printing will fundamentally alter the design and construction in the future. Speaking about the Kataja project, he says “Our vision is to bring a design paradigm shift where sustainable materials, such as UPM Formi 3D, transform the building of the future.”

In order to realize such an ambitious vision, technological advances in 3D printing machinery are also at the core of the Kataja project. Two different types of 3D printers suitable for printing large components have been developed at Tampere University of Applied Sciences. TAMK’s Principal Lecturer, Mika Ijas explains “One of the printers is capable of printing components up to 500mm wide. Another printer developed by the University utilizes a ABB welding robot, which when incorporated with the printer head, has a print area of approximately 2 square meters.”

Project Kataja will conduct an international seminar in Tampere on October 30, 2018, which will present the results of the project and will further discuss the 3D printing, biomimicry and large structures.

Additional information on the event: www.3dstep.com/futureconstruction2018.