This is the story of UPM’s internal growth. A story of perseverance, entrepreneurship and creativity. It started 10 years ago in Finland. UPM had businesses that generate paper and plastic waste in different combinations. In 2005, Markku Koivisto worked at the UPM New Ventures business unit. His job was to find ways to commercialize waste. 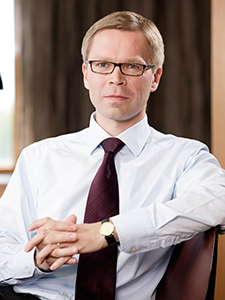 ‟Different combinations of paper and plastic are hard to recycle. We focused on recycling and commercializing raw material waste at UPM Raflatac”, explains Markku Koivisto, currently head of UPM Biocomposites.

No one had found an industrial use for the paper, plastic, silicone and ink waste generated in the production of self-adhesive label materials. Previously, these waste materials were taken directly to landfill or burned as energy waste.

UPM's researchers found the colour durability of lignin-free cellulose fibres in paper labelstock waste was better than that of wood fibres in composite products. They developed a patented production system that makes the compact surface structure more stain resistant than in other composite board products.

‟We offer a technically superior composite for outdoor use. In terms of weather and UV resistance, we beat all the other producers. Weather resistance means the surface structure of the board prevents water from absorbing”, Koivisto continues.

Over 50% of raw materials for the composite come from UPM’s self-adhesive labelstock production waste.

”Although we’ve been on the market for almost 10 years, we haven’t found another industrial entrepreneur producing paper and plastic composites. The industrial use of a material requires extensive knowhow – and we’ve got lots.”

UPM conducted research with the University of Vienna in 2005. That year, the first machines were bought for the production plant in Lahti. The next year, personnel learned to use the machinery. The production machinery was tested by manufacturing edge protectors, which UPM sold for packaging purposes, mainly to Finnish plywood mills.

Around this time, deck composites started to arrive in Europe.

”We had excellent timing. In 2008, we made our first decking board shipment to Germany. Germany has been a great success for UPM ProFi.”

Apart from customers, an important group has been world-class designers. Co-operation with Artek started in 2007.

”Artek choosing us was a jackpot. We were contacted by the then design director, Ville Kokkonen. I gave one edge protector to Ville, and he sent it to world-famous architect Shigeru Ban”, Koivisto recalls.

The Japanese architect is known as a developer and pioneer in ecological architecture. He had just started co-operation with Artek. He was intrigued by the material, as he had made innovative use of paper in his previous work.

Artek planned to appear at the Milan Furniture Fair, and UPM was the perfect partner. The rest is history. UPM was able to demonstrate its expertise in material production, and Artek got a stunning space. This is how the Artek Pavilion came about. It was introduced at the Milan Furniture Fair in 2007, and later at other major events. For UPM ProFi, this co-operation was one of many giant leaps.

The co-operation between Artek and UPM has generated many other designs, such as the UPM ProFi Floor composite plate and the 10-UNIT SYSTEM chair.

In 2008, UPM ProFi was granted permission to invest in a plant in Germany. Bruchsal was chosen as the location. The massive investment in a new plant emphasised the role of biocomposites.

‟I still remember the change, when the machines started to fill out the empty halls. It felt as if we had gained something major! To this day, I am still very pleased with and proud of the plant.”

The next major leap came at World Expo 2010 in Shanghai with the Finnish Pavilion designed by Teemu Kurkela. The facade of the building consisted of over 20,000 composite shingles, and UPM products were also showcased in other ways.

In 2010, UPM ProFi received many other awards, the most important being the Green Good Design. In Germany, UPM ProFi won the Best Innovator award for an innovation promoting sustainability.

The next year, UPM ProFi was granted the PEFC forest certification label, and the UPM ProFi Deck system received the CE marking. The product range expanded, and new products were introduced, including the step board used for building stairs and finishing edges of decking.

The facade panel, fence element and composite plate give customers more options. The biggest change in the market began in 2014–2015, when products with a hardwood look and feel became popular.

‟The hardwood look and feel is a trend driving growth, which UPM ProFi wants to share in”, emphasises Koivisto.

The composite industry is very competitive with around 90 companies, so it is essential to keep up with rapidly changing trends. UPM ProFi has expanded its product portfolio and customer base. There is lots to do, as UPM ProFi is a major player in small countries but small in larger countries. It has huge potential, as the composite deck market has grown in Europe some 15% a year since 2007.

UPM ProFi's competitive advantages are ease of maintenance and environmental friendliness. The raw material is mostly recycled and recyclable. As of Christmas 2015, UPM ProFi has recycled 30,000 tonnes of waste. People will always want products that look good and are easy to maintain. The UPM ProFi team has learned to kick a ball in the local park and now wants to play in the Champions League.

Steps on a 3D-printed bridge