Instead of polluting the Baltic Sea, nutrients could be put to work in biological effluent treatment. UPM is among the frontrunners switching to recycled nutrients in its wastewater processing.

By any standards, the forest industry is a major consumer of water. For decades, effluent treatment and efficient water consumption have been a major focus for for UPM. UPM is now taking a new leap forward by introducing recycled nutrients in its effluent treatment process, first in Finland, and then at all UPM locations.

Finland has exceptionally abundant groundwater reserves of very high quality. However, the Baltic Sea surrounding Finland’s southern and western coast is badly polluted. This pollution is partly caused by nutrients that have been washed into the sea from agricultural land and industrial facilities over the past decades. The countries responsible for this pollution include Finland, the other Nordic countries, Russia and the Baltic countries.

“The nitrogen in industrially produced nutrients is captured from the air in a process that consumes a great deal of energy. Phosphorus, in turn, is mined as phosphate rock, which is an exhaustible resource. The same phosphorus could also be used as a fertiliser in food production. If the nutrient side streams from industrial and agricultural processes were recovered, they would not end up in the sea. Nutrient recovery is also a matter of sensible recycling: one man’s trash is another man’s treasure,” says master’s student Sonja Ahvenainen, who will spend this summer performing nutrient recycling tests as part of her master’s thesis project. The tests will be performed at the UPM Kaukas mill in Lappeenranta, Finland. 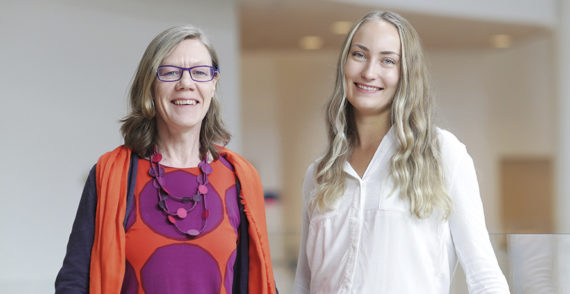 Sonja Ahvenainen’s thesis project instructors at UPM are Corinne Le Ny-Heinonen, Manager, Environmental Support, and Marjukka Joutsimo, Senior Researcher. The project began with background work and drafting the written part of the thesis. The actual tests will last one or two weeks and will be performed at the UPM Kaukas mill this summer.

Work is being done on several fronts to improve the state of the Baltic Sea. One of the leading organisations in the field is the Baltic Sea Action Group (BSAG), which encourages companies and farmers to commit to protecting the Baltic Sea.

UPM has already made three commitments to the foundation. The first project involved research on the use of biochar mixed soil for filtering impurities from water washed from agricultural lands into the Baltic Sea. The second project involved updating UPM’s list of chemical substances harmful to aquatic life. The third commitment is currently in progress, seeking new ways of using only recycled nutrients at UPM’s biological wastewater treatment plants by 2030.

How can we do this?

The market for recycled nutrients is evolving but, for the time being, it is very scattered. How can a sufficient amount of nutrients be sourced? How will mill infrastructure and logistics adapt to the change?

Sonja Ahvenainen has been seeking answers to these questions during her previous stints working for UPM, and this summer her background work will culminate in practical field tests.

The purpose of these tests is to examine how selected recycled nutrients behave in effluent treatment. The tests will be performed at the UPM Kaukas site, but Ahvenainen will also explore whether the process could later be applied at other UPM mills in Finland and abroad. The research forms part of her Master’s thesis.

“Last summer, I worked on determining where recycled nutrients are available, how large the required volumes are, and whether their use is at all feasible. Based on my research, the global utilisation of recycled nutrients should be possible by 2030,” Ahvenainen says.

Biological treatment has been used to process all forest industry wastewaters in Rauma since 1991. In 2002, UPM and the city of Rauma began the co-treatment of industrial and municipal wastewaters. “A tanker delivers recycled nutrient solution to the UPM Rauma paper mill twice a week. This gives you an idea of how massive the required nutrient volumes are. The recycled nutrient, be it solid matter or a solution, should be sourced from near the site. Long-distance transport is not sensible from a financial point of view, or in terms of carbon dioxide emissions," Ahvenainen says. In future, some of the recycled nutrients may come from UPM’s own side streams, but total self-sufficiency is not a feasible option. “There are nutrients being cycled in production, but recovering nutrients from wastewater is a more viable option,” Ahvenainen points out.

While still at upper secondary school, Ahvenainen dreamt of studying medicine. When she Ahvenainen began her studies at Lappeenranta University of Technology in 2013, she immediately knew that Environmental Technology was the right choice. In the summer of 2016, she was hired to write a preliminary report on the use of recycled nutrients in effluent treatment.

This summer is a milestone in her work, marking the launch of the actual testing phase of her study. “When the project began last summer, I was very excited to be involved in work that will have a real impact. Nothing is more important than working towards a cleaner planet. Working at UPM has been a great experience. All the environmental specialists have their own area of expertise and they are unbelievably knowledgeable,” she describes.

Towards a healthier Baltic Sea by nutrient cycling

The time is ripe for an industrial-scale recycled fertiliser