Towards a healthier Baltic Sea by nutrient cycling

Green carpets of algae conceal the rocks rising from water. A fisherman’s nets are covered in slime. The waters are abundant with rough fish. The effects of eutrophication are visible to everyone dealing with the Baltic Sea.

The blooms of blue-green algae in the late summer are a clear sign of eutrophication. Abundance of nutrients in watercourses together with warm and calm weathers result in massive cultures of poisonous algae. The risk of blooms has been high due to the excess nutrients in the Baltic Sea this year.

According to the Finnish Environment Institute (SYKE), the unstable weathers have first enabled the growth of algae cultures on the sea surface in July, but the windy and rather cold August has stirred the masses of water, mixing the reduced algae blooms in the water and moving them towards the shores. If the weather still warms up, there’s a chance that the blue-green algae blooms appear again in bigger volumes around Finnish shores.

The prolonged nutrient overload, phosphorus and nitrogen in particular, results in the eutrophic Baltic Sea. Earlier the majority of the nutrients emanated into watercourses were caused by industries but nowadays agriculture is the major source.

“The state of the Baltic Sea is still alarming. The algae blooms in July was a clear evidence that we need rapid actions in order to get the nutrient flow into the Baltic Sea under control. It is very important that single players take responsibility and are committed to improve the current situation,” describes Jari Luukkonen, the Conservation Director of WWF Finland. 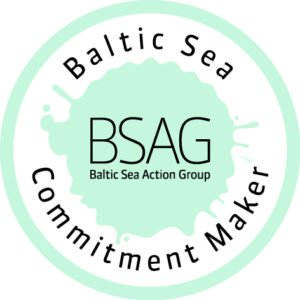 The Finnish Government made a commitment to the Baltic Sea Action Group (BSAG) already in 2010 to become a model state for nutrient cycling. This commitment is one of the focus areas in the government programme, where circular economy is a major theme. The Government aims to increase the recovering of nutrients at areas around the Baltic Sea and other watercourses so that at least half of the manure and municipal effluents are processed by 2025.

Part of this initiative is the three-year-long nutrient cycling trial programme administered by the Centre for Economic Development, Transport and the Environment of South Ostrobothnia. The programme aims to encourage companies to develop their research, development, innovations and investments around nutrient cycling. The companies can apply for funding for their projects if they fulfil the programme goals.

UPM reduces the overall nutrient loading in watercourses near its mills

The Baltic Sea Action Group is an independent non-profit foundation, based in Finland and doing valuable work towards reviving the ecological state of the entire Baltic Sea. Sustainable nutrient management and cycling are in the core of BSAG’s operations. BSAG connects important players to gain the highest possible benefits for the Baltic Sea. The organisations make commitments and public promises of concrete improvements within their own operational environment that enhance the state the Baltic Sea.

UPM has already made its third commitment to BSAG. The company aims to use only recycled nutrients in the biological wastewater treatment plants next to every company mill by year 2030.

“We are very pleased with UPM’s commitment. The nutrients must be recycled widely so that they wouldn’t end up in watercourses due to human actions. As a major player UPM leads the way to nutrient cycling and sets an example of persistent work for the Baltic Sea,” says Marja Koljonen, the Programme Director in BSAG.

Achieving the target isn’t easy, but it’s possible. The existing technology enables nutrient cycling. Case Rauma is a good example of this.

The forest industry waste water has been treated biologically in Rauma, Finland since 1991. In 2002, UPM and the city of Rauma started a common wastewater treatment which aimed at reducing the overall nutrient loading, the nitrogen loading in particular, in the watercourses near Rauma region. The waste water from UPM’s processes contains organic substance and little nutrients, hence nitrogen and phosphorus need to be added to the treatment process in order for the biological cleansing to occur. The municipal waste water is abundant with these nutrients, so common treatment enhances efficiency in claiming the nutrients from being eventually released to watercourses where they cause eutrophication.

In Rauma, UPM acquires also other nutrient-rich side streams to replace virginal phosphorus and nitrogen. Another suitable source for recycled nutrients has proven to be the wastewater from the biogas plant. The experience from the common waste water treatment in Rauma has been successful and beneficial to each party: the overall nitrogen loading has reduced by half and the amount of nitrogen compounds that cause eutrophication has reduced by 94 per cent.

Globally, UPM needs altogether two million kilos of nitrogen and 170,000 kilos of phosphorus annually for the biological treatment process at its waste water treatment plants. With the same amount of phosphorus, one could fertilise 11,300 hectares of field, which equals to some 226,000 garden plots size 500m2. To bind the required amounts of nitrogen from the air, one needs 35.4 GWh of energy, which equals the annual energy consumption of some 1,900 detached houses. The amounts of nutrients required in the treatment are huge, hence recycling nutrients is both crucial and reasonable. The nutrients UPM uses don’t end up in watercourses but they are recycled. By utilising others’ excess nutrients in UPM’s wastewater treatment process, the nutrient loading in watercourses can be reduced.

More recycled nutrients into use

The success of Rauma has inspired UPM to seek for new sources of recycled nutrients in the vicinity of its paper and pulp mills. In order to achieve the target, a project worker was assigned to quantify the nutrient needs for each waste water treatment plant and find possible local sources. UPM is looking for partners, whose waste and side streams could be put into good use in UPM’s waste water treatment processes instead of letting them eventually drift into the watercourses.

By recycling nutrients UPM enhances the wellbeing and preservation of both the Baltic Sea and other watercourses.

Read the 1. article of the series »

UPM reduces water use at its paper mills