UPM Kaukas leads the way in promoting the circular economy

UPM Kaukas is a frontrunner in the circular economy: The mill site makes efficient use of wood-based raw materials and converts residues into goods with economic value.

Trucks and trains transport logs and pulpwood to the integrated UPM Kaukas mill in Lappeenranta. Wood also arrives by ship and by means of log driving along the Saimaa water system.

The production facility comprises a pulp mill, a paper mill, a sawmill, a biomass power plant and a biorefinery, all of which together consume a considerable amount of wood-based raw materials. All raw materials are utilised efficiently with an eye to minimising waste.

The integrated mill is an industry forerunner in the efficient use of resources and harnessing side streams, says Teuvo Solismaa, General Manager of UPM Kaukas. 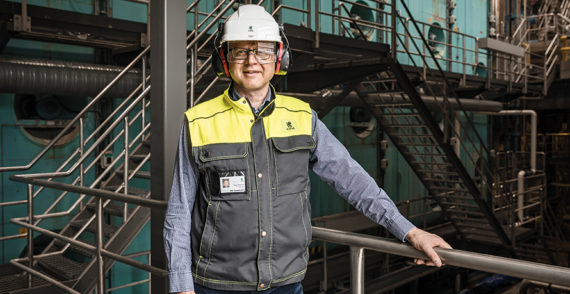 “Globally, we are the most versatile integrated mill site in the bioforest industry. We turn renewable raw materials into pulp, paper, sawn timber, energy and biofuels. This is what UPM’s Biofore strategy means in practice.”

Over 120 years of circular economy

Industrial symbiosis is currently a hot topic on the circular economy agenda. This is when adjacent production plants use all the raw materials entering the area as comprehensively as possible.

Industrial production at the current mill site began in 1892 when Kaukaan Tehdas Osakeyhtiö transferred its spool factory from Mäntsälä to Lappeenranta.

The spools were made from birch. Most of the raw material went to waste, but when a pulp mill was built in the same area in 1897, the leftover material was put to use.

Over the next few decades, a sawmill and a paper mill were added to the Kaukas mill site. This formerly also comprised a plywood mill, but plywood production has since been transferred to other UPM production plants in Finland.

The latest addition to the integrated mill site is the biorefinery, which began producing biofuels from tall oil, a residue of pulp production, in 2015. Its main product is the renewable traffic fuel UPM BioVerno.

Efficient use of by-products

Production at UPM Kaukas is carefully planned to make efficient use of all side streams and residues. For example, the pine and spruce logs delivered to the Kaukas mill site are turned into sawn timber at the sawmill. Slabs that are not saleable are chipped, and the chips and the sawdust from the sawmill are used in pulp production at the adjacent pulp mill.

“Crude tall oil, a residue produced when pulp is cooked, is used for making renewable diesel and naphtha. All side streams at the biorefinery are also fully utilised.

There are major synergy gains in having multiple production plants operating on the same mill site. Managing the raw material chain is clear and straightforward.

The pulp produced at the pulp mill can, for instance, be pumped directly to the paper mill while it is still wet, which provides savings in drying and logistics costs.

A major source of synergy is the mill site’s own self-sufficient energy generation, which makes use of side streams from the production plants.

Thanks to the mill site’s synergistic energy production, biofuels accounted for 88% of the energy consumed at UPM Kaukas in 2016. There was even enough renewable energy for generating district heating and electricity for the City of Lappeenranta.

Good results have also been achieved in other areas of environmental performance in recent years. Based on chemical oxygen demand measurements, emissions to water were reduced by 37% between 2000 and 2016. The emissions were lowered mostly due to the biological effluent treatment plant built in the early 1990s and streamlining the production processes.

The Kaukas mill site’s airborne sulphur dioxide emissions were reduced by 49% between 2000 and 2016.

“The main reason for this reduction is the biomass power plant completed in 2009, which replaced two older bark boiler plants,” Solismaa adds.

In addition to researching pulp and paper, in recent years the centre has increasingly focused on new businesses, such as biofuels and biochemicals.

“The research and development centre is essential to the success of the integrated mill site. It provides the mills with top-class expertise and support for challenges that arise in production,” Nousiainen says.

Important research areas also include the utilisation of side streams from pulp and paper production. As a key part of its effort to promote the circular economy, the R&D centre is currently examining how effluent sludge could be used as a fertiliser and as a raw material in biogas production.

According to Development Manager Markku Heinonen from the City of Lappeenranta, UPM’s research and development centre is also important to the Lappeenranta University of Technology. “Long-term research co-operation benefits commerce and businesses throughout the entire region,” Heinonen points out.

UPM and Lappeenranta have common goals. According to Heinonen, Lappeenranta aims to become a model city for renewable energy and the circular economy and to encourage local businesses and people to adopt new technology as frontrunners in sustainability.

Lappeenranta has repeatedly been among the top cities in the international WWF Earth Hour City Challenge, which encourages cities to participate in preventing climate change. “One of the reasons for our success is the energy produced using bio-based raw materials from UPM Kaukas.”

Heinonen says that UPM also has a significant effect on the city’s economy. Lappeenranta has a population of 73,000, and UPM is the city’s single largest private employer, directly employing around 1,000, while also providing work for 160 subcontractors.

“In addition, the mill site creates approximately 2,600 indirect jobs in fields such as transport, commerce and construction.”

According to Heinonen, the integrated Kaukas mill site pays the City of Lappeenranta a total of EUR 15 million per year in taxes. The total sum of indirect tax revenues from UPM is many times greater.

In addition to being an important economic player in Lappeenranta, UPM also actively participates in promoting the city’s wellbeing and vitality by supporting local sports teams and associations. UPM also collaborates with educational institutions, businesses and public organisations to highlight the circular economy.

A global move towards the circular economy

Around we go – the shape of future waste management is circular