The properties and functionality of UPM BioVerno have been verified through different tests at VTT. In earlier fleet tests for cars, VTT stated that UPM BioVerno works just like traditional diesel.

In addition to fleet tests, the test project also included long-term material and storage tests. The goal was to inspect the possible effects of UPM BioVerno on different materials. The tests included, for instance, exposing the metals used in fuel systems to different fuels for seven months and testing the storage life of the fuel in a year-long test. Several analyses were done over the course of the tests. Typical plastic, rubber and metal components of the fuel systems in diesel cars were chosen for testing. In addition to testing UPM BioVerno, its performance was compared to other fuels available on the market. 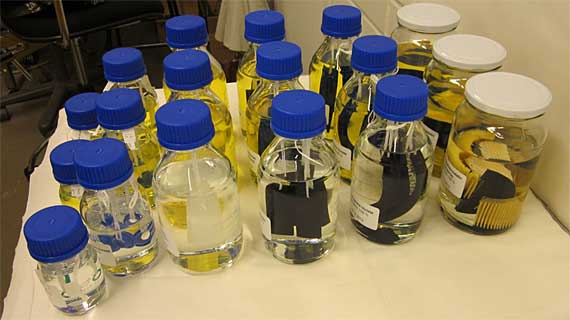 In the exposure part of the material test, different components were exposed to UPM BioVerno
and the reference fuels at VTT.

Components included in the material tests left to dry after exposure.

The research has included several intermediate checks, and the final tests have now been completed. VTT already states that UPM BioVerno shows good performance in the long-term tests. No alarming properties were apparent in material compatibility or fuel storage life compared to other commercial fuels, as was assumed at the beginning of the research. Therefore, it can be said that UPM BioVerno works just like traditional diesel and also in terms of materials and storage. ​