Kaarlo and I – with the company since the beginning

This year, Finland celebrates its 100 years of independence. During those 100 years the world and the role companies play in it have changed a lot. Companies compete globally and are compared with each other using a number of responsibility indicators, often without taking the societal context into account. I learned this myself in a very concrete way some time ago, after having a discussion with an external UPM evaluator in the morning and then going through photographs which I had found with some inheritance documents in the evening.

The creation of societal value is an interesting topic. UPM pays a significant amount of corporate income taxes and indirect taxes, especially in countries where UPM's business areas create substantial added value. A study by the Research Institute of the Finnish Economy (Etla) provides a concrete example of value creation. According to the study, UPM produces the most added value in Finland, when considering the added value produced by companies themselves and the indirect added value resulting from purchases. That is what keeps modern society going.

Even before Finland gained its independence, UPM’s predecessor companies were creating value for Finland in a number of ways. Areas surrounding mills began to grow into population centres and companies offered many services that, today, are provided by society. UPM's predecessor companies founded a number of elementary schools, for example in Valkeakoski and Kuusankoski, back in the 1880s. The Kymi company founded the first industrial vocational school in Finland in 1918.

While going through the inheritance documents, I noticed that my family, originally from Kuusankoski, in South-eastern Finland, has a connection with UPM that goes back several generations. The man in the photograph is my Great Uncle Kaarlo. I found the photograph and his school certificates with the documents. Kaarlo studied at the Voika mill private elementary school at Kuusankoski in the 1930s and then continued his studies at the three-year Kymi company vocational school for boys. At the time, the company trained its employees itself from the beginning, and after his studies, Kaarlo too spent his whole career at the mill. 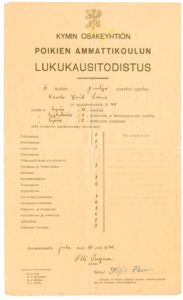 I started my school career by going to a municipal comprehensive school in the 1970s. After completing two years at a municipal vocational school, I studied a year at the company's vocational school and then went to work at the mill in 1987. My younger brother followed in my footsteps, except that when he started his studies, apprenticeship training and workplace learning had replaced the mill’s own vocational school.

My family provides an example of the change in the Finnish education system. UPM still supports education, for example, by contributing to the Sanat haltuun (Words matter) project organised by the Finnish Reading Centre and by collaborating with universities. UPM also arranges apprenticeship training at the company’s mills. Today, however, education is primarily financed with taxes.

The world has changed, and the societal circumstances and operating environment should be taken into account when evaluating the companies' activities.

It seems Kaarlo and I have at least one thing in common: neither of us excelled in physical education classes at school. But there's also one clear difference: Kaarlo wore much classier clothes than his relatives today.

UPM reduces water use at its paper mills