UPM’s family tree—from the roots to the leaves

In Finland there is a lot of wood, which can be used to manufacture a variety of products. These products have been in high demand on the export market, where demand has been influenced by societal, economic and technical developments. These developments have forced the Finnish forest industry to constantly reinvent itself.

The UPM-Kymmene family tree is the result of this industrial evolution. The tree consists of over one hundred sawmill, pulp, paper, plywood and wood product companies. The company’s main roots are Rauma-Repola, United Paper Mills and Kymmene, and main branches Rosenlew, Kaukas and Schauman.

At the tips of UPM’s roots are water-driven sawmills that supplied sawn timber to European marine and trade giants during the 1700s and 1800s. To meet export demands, these sawmills eventually joined forces, as did dozens of pulp and paper mills a few decades later.

After domestic restructuring, Finnish companies branched out into Europe and then to other continents. A world leading producer of papers, wood products and self-adhesive labels, UPM-Kymmene, was born. Since 2008, the company has found new focus areas in pulp, energy and modern bioproducts.

Renewable resource industry has truly been the renewable asset of Finland.

The companies that form UPM’s oldest roots are the water-driven sawmills that started operating in the 1760s in Ylitornio, Rovaniemi and Karelia. The number of sawmills multiplied in the late 1800s following the construction of the Saimaa Canal and the first rail connections.

At the same time, the first paper mills appeared at UPM’s roots. They were established e.g. in Valkeakoski, Kuusankoski, Voikkaa and Jämsänkoski. The first pulp mill began operations in Valkeakoski in 1880.

With the establishment of Kajaani Oy in 1907, UPM’s roots were spread across the whole of Finland. Pulp, paper, plywood and spools industries all flourished. Spools gave birth to the Kaukas mill, which even today is a part of UPM as are the most successful plywood producers of that time, Joensuu and Säynätsalo mills.

Paper was mostly exported to Russia, and it was pulp that opened the doors to the west. To succeed in the fierce competition of western markets Kymmene, Kuusankoski and Voikkaa merged (1904) to form Kymi Oy—the largest paper company in the Nordic region at the time of its birth.

The next wave of structural changes came during the post-war period in the 1950s. In 1952 Rauma-Raahe, Repola-Viipuri and Lahti company merged into the country’s biggest industrial company, Rauma-Repola. Following disputes between the families that owned the United Paper Mills, Myllykoski withdrew from the company and operated independently for many decades.

The 1960s was a decade of strong expansion. Within a decade, 26 paper machines had been built in Finland, and annual paper production capacity rose from 1.4 to 3.5 million tonnes. Paper became a bigger export than pulp.

A desire to process paper close to the customers encouraged Finnish companies to invest in paper sack mills in France, Italy and the UK. These initial attempts by United Paper Mills, Schauman and Rosenlew to go global were mostly unsuccessful, and companies quickly withdrew from them.

Kymi and Kaukas had the most success in establishing operations abroad. Kymi established Nordland Papier (1967), which is still a part of UPM today. 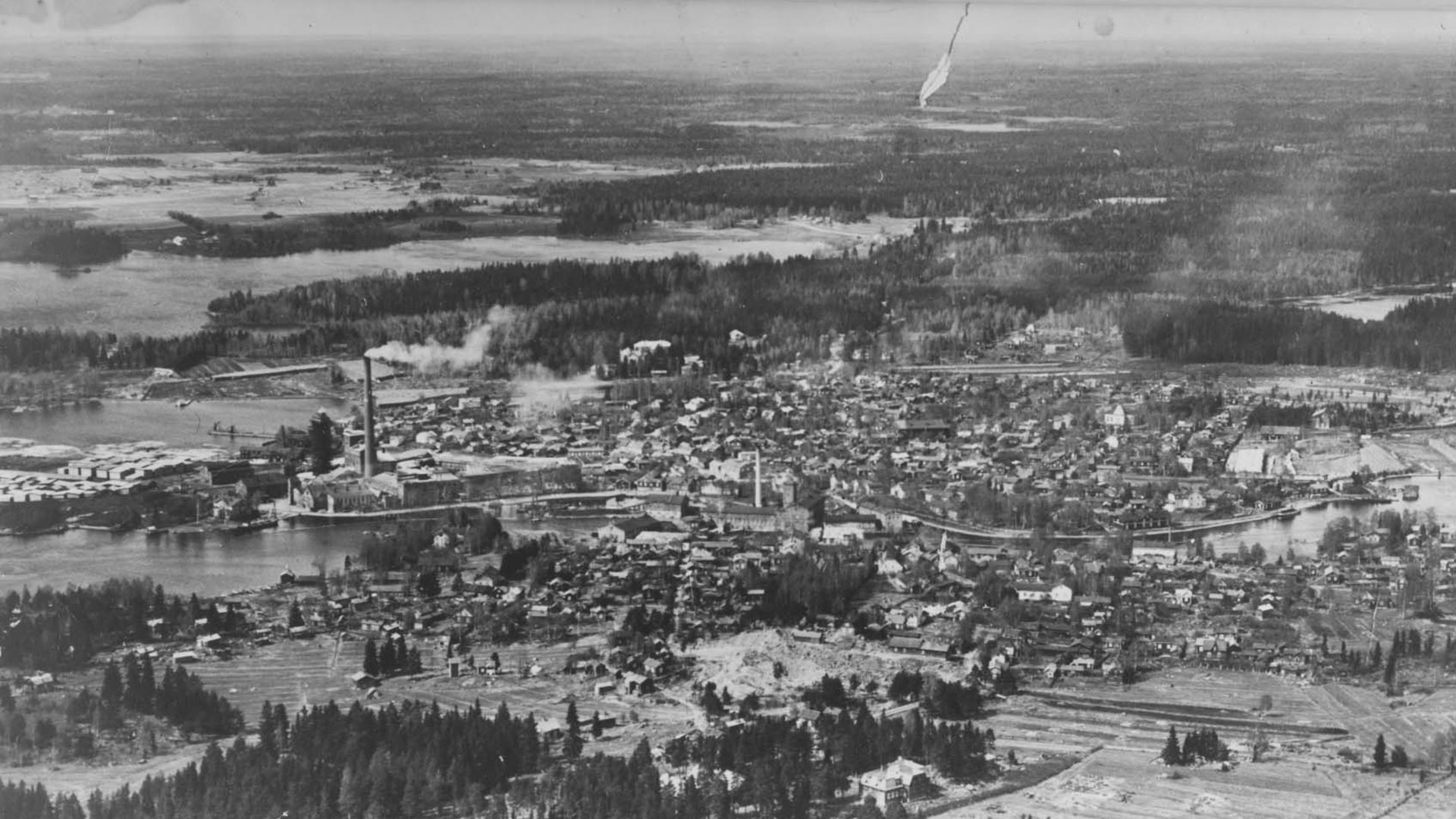 It took some time before anyone ventured abroad again. In the 1980s United Paper Mills built a mill in Shotton, UK, and acquired the Stracel mill in France. Then, in 1986, Kymi-Strömberg and Kaukas merged into Kymmene, which bought the Chapelle Darblay mill in France and built the Caledonian Paper mill in Scotland.

Market liberalisation in the late 1980s forced the Finnish forest industry to reinvent itself once again. Schauman and Kymmene merged in 1988. Joutseno-Pulp and Kajaani merged with the United Paper Mills, which in turn merged with Rauma-Repola to form Repola Ltd. in 1991.

One of the biggest structural changes in a nation recovering from the depression of the early 1990s took place in the autumn 1995 as Kymmene and Repola Ltd. struck a deal: United Paper Mills and Kymmene were merged to UPM-Kymmene and metal industries were cut off to Rauma Oy.

The new company began operations in the beginning of May of the following year under the iconic griffin logo. The logo is a legacy of the Kymi company that almost a century earlier held a competition to design a logo for exports to Russia. The competition was won by the famous artist Hugo Simberg, whose original design has since been updated four times.

At the beginning of the millennium, there were only four large forest industry groups in Finland, whereas a decade earlier there were approximately thirty.

Finland was too small for these big groups, which in addition to strengthening their positions in Central Europe began going global by acquiring portions of the North American and Asian paper markets.

In 1998, UPM-Kymmene became a minority shareholder in the Changshu paper mill in China; soon after the mill was entirely owned by UPM. Next UPM purchased the North American Blandin Paper Company (1997) and Miramichi (2000) mills, and then the German Haindl mills (2001).

UPM became a more prominent competitor in plywood production by acquiring the Otepää mill in Estonia and the Chudovo mill in Russia.

To balance these investments, by the mid-2000s the company had sold around twenty non-core mills and companies. Instead of cardboard and plastic packaging UPM decided to specialise in self-adhesive labels (UPM Raflatac) and release liners (UPM Specialty Papers).

By 2006, it became apparent that digitalisation would permanently reduce the demand for paper. Closures at the Voikkaa, Miramichi and Kajaani mills triggered a change in UPM’s operations; pulp and energy operations that were considered secondary became market-based businesses. UPM started to envision a future based on innovations developed from fibre, wood chemicals and biomass. The company’s new identity and strategy were announced in the autumn of 2009, when UPM became The Biofore Company.

The first significant steps on the road to transformation were the acquisition of the Fray Bentos pulp mill in Uruguay (2009), the beginning of biocomposite production, the rapid expansion of the label business and the decision to build a biofuel refinery in Lappeenranta.

The biorefinery commenced operations in 2015. This facility and the decision in 2019 to build another pulp mill in Uruguay are the latest links in the chain of industrial evolution. Again and again, this has resulted in the innovation of new products from renewable materials in order to meet evolving needs.

UPM has a long history in graphic papers, plywood and energy production. The spearheads of future growth are high-value fibre products, specialty packaging materials and biochemicals that are helping the world to reduce its dependence on fossil raw materials.

In 2018, UPM introduced the slogan Biofore – Beyond Fossils, which summarizes the company’s new direction.

Wood, wood fibre, molecules and residues are the construction materials of the future—just like they were 250 years ago, when the original UPM companies set down their roots.