The decline in the reading skills of young people in Finland has been a major topic of discussion in recent years. One of the more positive cases to make the headlines has been UPM’s Words Matter project (Sanat haltuun in Finnish). Many Finnish boys have changed their attitudes towards reading and literature thanks to the inspiring workshops!

The eighteen-month-long project – a joined initiative of UPM, The Finnish Reading Centre, and the Finnish Reading Centre’s networks – inspired young men studying technical subjects to read more and to develop their reading skills by analysing rap lyrics. The project came to an end at the end of last year. What are the results and next steps?

The project reached its goals

During the project, Aleksis Salusjärvi, critic and educator, toured vocational schools around Finland together with musician Mikko Sarjanen, and organised workshops about why words matter and what can be achieved with them. The workshops were planned together with teachers and were a part of the official curriculum.

The project reached its goals: 3,000 students participated in 100 workshops in 29 different locations. According to the feedback, most of the students thought that the workshops made an impact on their reading habits. The workshops taught them to process text more critically and increased their general interest in reading.

Most importantly – this one fifth is composed of boys who hadn’t been interested in reading before! 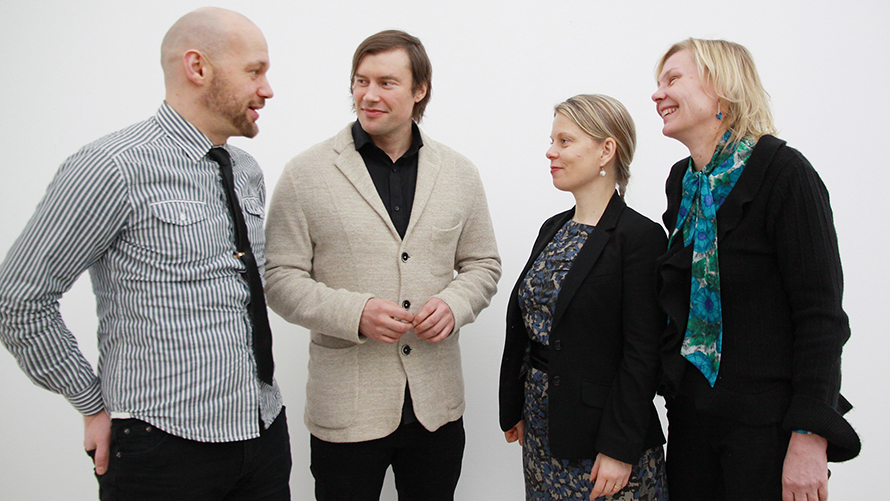 Aleksis Salusjärvi (left) and Mikko Sarjanen who lead the workshops, together with Sari Sulkunen and Merja Kauppinen from the University of Jyväskylä.

Rap is an excellent gateway to literature

Sari Sulkunen, a lecturer from the University of Jyväskylä, notes that even though vocational training focuses on work skills, more general life skills are just as important in the long run.

”In today’s world solid reading and writing skills are vital. These skills decide whether you’re in control of your own life or being controlled by others. The Words Matter workshops made these skills visible as useful tools in many different contexts. The students understood why words matter and what can be achieved with their help. This was one of the biggest successes of the workshops,” says Sulkunen.

The motivation to read more can be sparked by taking part in interesting activities related to literature. In the workshops the students read because they truly enjoyed the programme, not just because of their studies. Even though not all students were active during the workshops, this does not mean there was no change in their attitude towards reading. For many students the most rewarding moments were the quiet ones spent analysing text.

Merja Kauppinen, a lecturer from the University of Jyväskylä says that rap is an excellent gateway to other literature. According to Kauppinen the workshops motivated and inspired the students, who felt that they had truly gained something for themselves from what they had learned.

“Young minds need a little shaking up, and this concept is a perfect way to do it.”

Aleksis Salusjärvi (left) and Mikko Sarjanen who lead the workshops, together with Sari Sulkunen and Merja Kauppinen from the University of Jyväskylä. ”Even though some young people don’t read at all, they may still listen to a lot of music and have an ability to analyse lyrics. The problem is that they don’t know how good they are,” says Salusjärvi.

Rap workshops as a permanent part of the curriculum

A big education reform is currently underway in Finland. One aspect of the reform is less specialised degrees. The end-goal is that degrees are not specific to professions but can later be applied to many different fields of work flexibly without having to go back to school.

With the new vocational education, the shared studies support lifelong learning. The teachers are forced to think what can be realistically fit into the curriculum.

Sari Sulkunen wants to make sure the Words Matter project won’t just be a fluke. Merja Kauppinen has a suggestion. “Underperforming students can find traditional classes boring, and can have previous bad experiences with studying. Perhaps analysing rap lyrics could be a more permanent part of Finnish studies?”