The giant of Rauma

The forest industry has been the cornerstone of the Finnish town of Rauma for over 100 years. The UPM Rauma mill has an indisputable role in sustaining the vitality and appeal of this small coastal town.

Each year, tens of thousands of tourists travel to the town of Rauma on the west coast of Finland. Rauma is most famous for its historical wooden house district, called Old Rauma, which is a Unesco World Heritage site. Amidst the district's idyllic alleyways, houses and backyards, one can still sense the spirit of a medieval town.

Despite the historical surroundings, life in Old Rauma is as modern as in the newer parts of town. For example, all Rauma's districts use district heating produced in the UPM Rauma mill site next to the town.

The forest industry has been the main source of income in Rauma for several generations. The town's first saw mill was established in 1912 and a pulp mill followed soon after that. Rauma's first paper machine started production in 1969. This strong start led into one of the largest concentrations of Finnish forest industry, that at one time employed up to 4000 people. Today, the traditional mill site consists of a paper mill, pulp mill, tall oil distillation plant and a power plant, which employ altogether over 700 people.

The UPM Rauma paper mill is mainly known for its three paper machines that produce coated and uncoated magazine paper for magazines, catalogues and marketing materials.

But there is more to the mill than paper: it generates heat, treats wastewater and creates stability for the town by providing reliable employment. The mill also collaborates with various other parties and helps attract other businesses to Rauma. A stone's throw away from the historical centre of Rauma, there is a busy exportation port waiting for new freight to be transported all around Finland.

In 2014, over 5.5 million tonnes of goods were exported. Being close to the port creates clear savings for UPM. Instead of storing paper reels in the mill, the company transports them with specially designed trucks directly to the port warehouse to be loaded onto ships. "This arrangement improves our cost efficiency and competitiveness. The less the paper reels are handled, the less they get damaged. This is very important to our customers", says Timo Suutarla, general manager at UPM Rauma.

Providing district heating and clean water for the town

Also located in the UPM mill site is the Rauman Biovoima energy company that generates district heating for the town and acts as its partner. It ensures that the people of Rauma have heating and warm water throughout the year. Over 99% of the district heating used by the town is generated locally next to the paper mill.

The power plant is among the top users of recovered fuel in Finland. It utilises forest residue from the surrounding region, commercial and industrial packaging waste and energy waste from Rauma.

In 2013, the power plant invested in recovered fuel usage by acquiring equipment to improve the receiving, handling and storing of recovered fuels. Thanks to its investment, the plant has been able to replace almost all imported fossil fuel with renewable Finnish fuels. Using domestic fuel creates savings, thus further increasing UPM Rauma's cost efficiency. In addition to district heating, Rauma also benefits from the mill's wastewater treatment plant.

In addition to its own, UPM Rauma treats all wastewater produced by the town. The figures are dizzying: the plant can process 1.2 cubic meters of wastewater in a second. This means that the average annual wastewater created by one household can be treated in one minute. 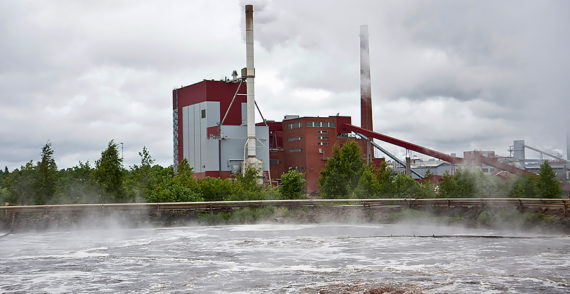 The efficiency of the plant is demonstrated by the environmental status of the Sea of Bothnia, which has in recent years seen significant improvements. The positive change has also been widely noted among high-ranking Finnish policy makers. However, those who take most pleasure in the healthier sea are the ordinary people who have cottages or boats on the coast — and in this historical marine region, there are plenty of them.

The Rauma paper mill's annual production capacity is nearly 1 million tonnes of paper. This requires plenty of raw wood material, which is almost exclusively sourced from Finland, mainly from areas around Tampere and Turku.

In Rauma, everybody knows somebody who works at the paper mill, and it has often provided livelihood for many generations of local families.