More is more with the Biofore Concept Car The Biofore Concept Car story continues with yet another international award. The car has received the KWF-Vision innovation award at the KWF-Tagung forestry trade fair in Roding, Germany in June.

UPM received the KWF-Vision award for future-oriented thinking, and it was given jointly to UPM and the Helsinki Metropolia University of Applied Sciences. As Robert Morigl, chairman of the KWF explained, “The project is an excellent example of the innovative use of wood as a raw material and is characterized by pioneering development work”. 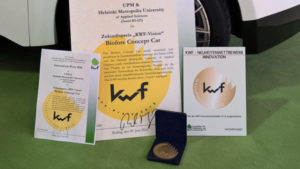 The innovation medal is awarded for future-oriented thinking .

The event was held by the German Association for Forestry Work and Forestry Technology (KWF). It is a registered, non-profit association and the competence centre for forest work, forest technology and wood logistics in Germany and Europe. The KWF also mediates across the sectors between research, practice and industry in the forestry, wood and bio-energy sectors. The KWF organises the KWF-Tagung, one of the largest forestry trade fairs in the world.

The Biofore Concept Car showcases the use of UPM’s innovative biomaterials in the automotive industry. The majority of parts traditionally made from plastics are replaced with high quality, safe and durable biomaterials, UPM Formi™ and UPM Grada™, which can significantly improve the overall environmental performance of car manufacturing. The vehicle runs on UPM's renewable wood-based diesel, UPM BioVerno and UPM Raflatac’s self-adhesive labels are being used in interior design and spare parts. The Biofore Concept Car is designed and manufactured by students from the Helsinki Metropolia University of Applied Sciences.

The Biofore Concept Car was first introduced at the Geneva International Car Fair in 2014. The story will continue also in the autumn, follow our social media channels to find out where the car will be next.

Steps on a 3D-printed bridge