A Chinese project with a Finnish twist

UPM has completed its new paper machine project at the Changshu mill in China not only on time, but with an enviable safety record.

Sustainability and safety have been cornerstones in this huge EUR 277 million project, which was completed in December 2015. The new paper machine can produce up to 360,000 tonnes of high-quality labelling materials and wood-free uncoated papers annually. This ‘swing-concept’ machine also makes it possible for the mill to shift between grades.

“It’s been a very challenging project since it’s different from anything we have done before. We had to innovate something wholly new,” says PM3 Project Director Timo Heinonen, who has previously been involved in many new paper machine and rebuild projects in different roles.

Safety has been a top priority throughout the entire project. Heinonen says he is very happy to have reached over four million hours’ work time without a single lost time accident (LTA).

LTA is a leading safety management indicator referring to an accident occurring at work and resulting in at least one full day of absence from work. At UPM, the company-wide target was already very challenging: 5. The target for the PM3 project was even lower: 0.8.

“From the start, the most important priority was ensuring that nobody was injured, and we’ve worked hard to achieve this target. We implemented strict safety rules and we have spent more time on this than in any other project I’ve worked on previously,” says Heinonen.

Since dozens of contractors and suppliers were to be involved in the PM3 project, a comprehensive occupational health and safety (OHS) plan was produced in the project’s early stages and was distributed to every new supplier. An OHS team was set up consisting of five full-time supervisors, one nurse and one assistant.

Heinonen and most other people in the project team have many years of experience, and many were already involved in the Changshu mill’s PM1 project between 2003 and 2007. One of them is PM3 Project Manager Steve Masterson, who continued working at the mill for some time after the installation of PM1.

“In many ways, these two projects have been similar but there are also differences,” says Masterson. “This time much of our equipment has been sourced from China, while before almost everything was imported. However, the biggest difference – and challenge – has been the swing-concept machine. Both the machinery and the process itself have to be flexible so that we can make quick and effective grade changes.

Finnish consultancy Pöyry and Chinese design institute Haisum were chosen as the engineering companies. Voith of Germany was selected as the supplier for the new paper machine. This marks the first time that UPM bought a machine of this size from Voith.

“We were very happy to be selected for this UPM contract. This has been a big and demanding project, because the machine will be producing different kinds of paper grades,” says Johannes Rimpf, Voith’s Project Manager for the PM3 project.

On-site installation of the machine started in May 2015, after which Voith worked closely with UPM’s project team until early December, when the machine was handed over to the Changshu mill.

“It has been a high quality project all over, especially in terms of safety,” says Wolfgang Windisch, Installation Manager at Voith. “The regulations are strict and the safety targets are always followed up. I believe that UPM’s ‘Finnish touch’ has contributed to the project’s success on the safety front.” 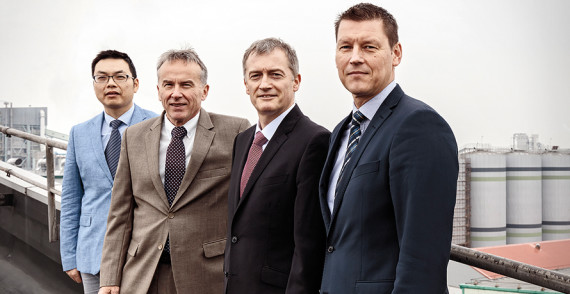 “We managed to stick to the schedule despite the fact that we had many more rainy days than expected. During 2014 we lost 38 days due to rain, forcing us to stop all construction work for safety reasons and due to difficult working conditions,” says Antti Mankki, Project Construction Manager.

Later on, in June, both PM1 and PM2 were shut down for four days each and the entire mill for one day. This stint was devoted to tasks that required a total shutdown, such as upgrading the fresh and effluent water treatment plant, the power plant, the power distribution and remaining tie-in work.

Several sub-projects in one

At the same time, construction, design and installation work for the paper machine was underway, and several separate projects connected to PM3 were completed.

One of them involved upgrading the boilers’ flue-gas desulphurisation system (FGD) for the removal of sulphur dioxide (SO2) and lowering emissions for better environmental performance.

Another was an investment in a new precipitated calcium carbonate (PCC) plant. UPM chose Specialty Minerals Inc (SMI) as its equipment supplier, also signing a ten-year production contract with the US-based company. PCC improves paper smoothness and opacity as well as the efficiency of raw materials usage.

The mill further invested in a new 100,000 tonne cut-size sheeting line for the production of copy paper.

“This was the first time we’ve completed a project in China involving so many local suppliers and engineers. It has been a very positive experience for me. You might think there’d be cultural problems or that we wouldn’t understand each other, but it is very easy to work with Chinese people. They get things done and are not resistant to change. After a decision is made, things happen very quickly.” concludes Timo Heinonen, PM3 Project Director.