This year marks the 150th anniversary of the beginning of UPM on the riverbanks in Kuusankoski, Valkeakoski and Pori. Many UPM mills have been able to reform over the course of time developing their operations to meet the needs of each era. Now they will celebrate their 150th anniversary, not only with various events, but also through everyday work.

UPM's family tree consists of more than 130 Finnish forest industry companies, from east to west. Many major forest companies, such as Kymi, United Paper Mills, Kaukas, Kajaani, Schauman, Rosenlew, Rauma-Repola and Raf. Haarla have merged into the current UPM-Kymmene Corporation. The company logo, UPM's Griffin, is the oldest company logo still in use in Finland. It dates back to a design competition organised by Kymi at the end of the 19th century. The winner of the competition was a young artist named Hugo Simberg, whose works of art are now treasured in the Finnish National Gallery. 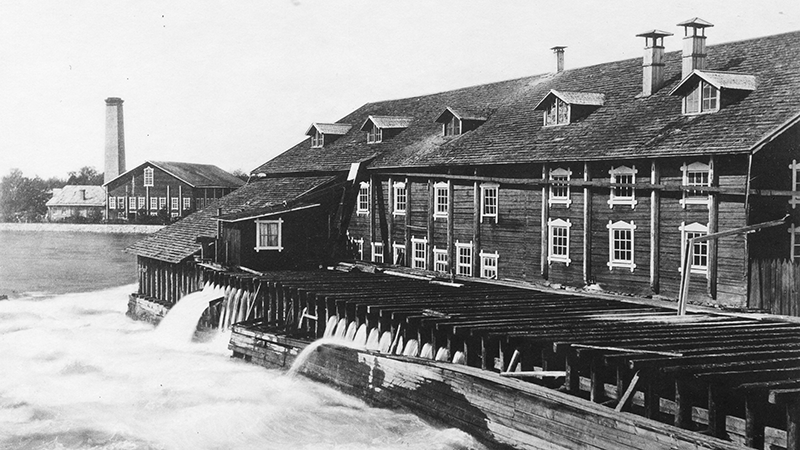 Tervasaari paper mill in Valkeakoski was completed in 1872 and the pulp mill, in the background, in 1880.

Of these historic mills, Verla is now a popular mill museum that, in addition to its 150th anniversary, celebrates its 50th anniversary as a museum and 25 years as a Unesco World Heritage Site. UPM-owned Verla invites all to its celebrations on 14 May 2022. A history book entitled "Yesterday lives in Verla" will be published along with an exhibition opening in the event. The book is written by Eero Niinikoski, Cultural Counsellor, and Ville Majuri, Director of the museum. In the summer, Verla will organise film nights where the public can see archive treasures from the history of Kymenlaakso region’s forest industry.

Verla mill museum, restaurant, exhibitions and shops are open from 2 May to 30 September. Detailed opening hours can be found on Verla's website. The museum, i.e. the groundwood and board mill, can only be explored with a guide, and tickets for the tour can be purchased conveniently in the museum's online store in advance.

In Valkeakoski, UPM Tervasaari paper mill will publish a series of stories on its history for both internal and external channels. The stories are written by Ari Sirén, Manager of the Company's Central Archives located in Valkeakoski. The Central Archives will also organise an exhibition of the mill and the community that has grown around it. Various other events are planned for the mill’s employees and residents.

In Pori, UPM Seikku sawmill has published a mini-history on UPM Timber's website. The history will be distributed in print to employees and guests at the festivities held in June when also a short video of the sawmill's one-and-a-half century of history will be premiered. During the year, UPM Seikku has also carried out a birdhouse project together with the students of the Kaarisilta school. The project increased the class excursion fund for 9th graders.

The UPM Kymi pulp and paper mill in Kuusankoski will publish a book of celebrations written by Antti Rinkinen entitled "Kymi 150 years in the flow of development". The book is distributed to mill employees and is available locally in libraries. UPM Kymi will organise events for personnel and external stakeholders in the autumn. The events are part of the Kymenlaakso region’s forest industry anniversary celebrations. The various forest industry companies and other organisations will hold a broad range of events, from museum exhibitions to cultural events, from seminars to digital modelling and from art to traditional coffee making in the forests. The anniversary year has its own website kymenlaaksonihme.fi.

On 18 May, an exhibition entitled “The Turn of the Tree" will open in Kotka at the Vellamo Maritime Centre. The exhibition offers a journey to the roots of the forest industry and a peek into the future, which is also presented by UPM's biomedical products and biofuel innovations. The exhibition will continue until January 2026. On 7 June The Kymenlaakso Chamber of Commerce will hold a "Löysin vaihto – Kymenlaakso forest industry 150 years" seminar in Kuusankoski. One of the guest speakers at the invitation-only seminar is Jussi Pesonen, President and CEO of UPM.

UPM
We offer renewable and responsible solutions and innovate future options for fossil economy solutions in six business areas: UPM Fibres, UPM Energy, UPM Raflatac, UPM Specialty Papers, UPM Communication Papers and UPM Plywood. As a leading player in our field and a pioneer in sustainability, we have signed the UN's 1.5 degree climate commitment. Our climate change mitigation objectives and measures are based on scientific research. Our company employs approximately 17,000 people and our annual turnover is approximately EUR 9.8 billion. UPM's shares are listed on Nasdaq Helsinki Ltd. UPM Biofore – Beyond fossils. www.upm.fi