WISA Woodsat wooden satellite completed a successful stratospheric flight on Saturday 12 June 2021, when a test model of the satellite was sent on a flight from Heureka Science Center at Vantaa, Finland. The main purpose of the test flight was to trial the systems of the satellite and especially assess the crucial boom camera functions.

The balloon carrying the test model took off at 13:25 and the flight lasted for 2 hours and 54 minutes. The satellite reached its maximum altitude in the upper atmosphere 31.2 km over the city of Mäntsälä. The balloon exploded as planned, and the set-up began its descent under a parachute and landed safely into a forest a few kilometers southwest of the city of Lahti.

“All the systems performed as planned during the test flight. The satellite landed eventually in a forest area at Herrala, close to lake Hahmajärvi. The recovery team was on site soon after the landing, but the recovery took a bit more time than expected as the flight equipment had landed on the top of high spruce tree”, says WISA Woodsat mission manager Jari Mäkinen. 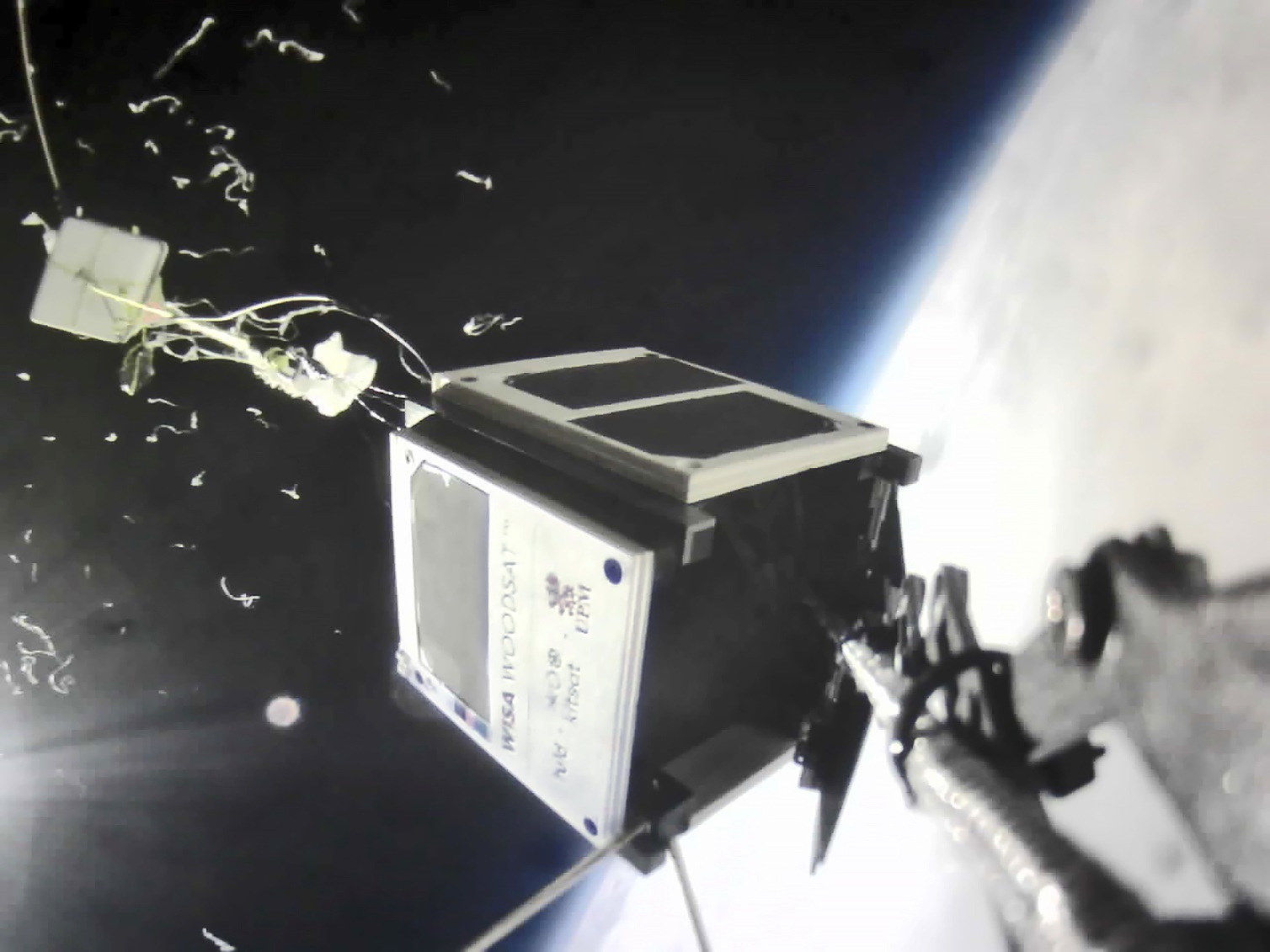 WISA Woodsat’s "selfie stick" camera took a picture just when the carrier balloon exploded as planned at the altitude of 31.2 km. In addition to the balloon fragments, the picture shows parts of the flight train and the space view from the stratosphere.

Since the test model worked as planned during the flight, the preparations for actual space flight will continue according to schedule. The flight model of WISA Woodsat satellite and its spare will be completed by the end of June. The spare model will be used for extensive tests that will be carried out at ESTEC, the technical center of The European Space Agency, in Noordwijk, Netherlands. The satellite will be put in a space simulator and subjected to the vibrations of the rocket ride in a specially made shaker.

WISA Woodsat is the world’s first satellite using wood in its primary structure. It is made of WISA-Birch plywood, which is coated against strong UV radiation using a new atomic layer deposition method. The comparison panels are coated with industrial UV lacquer. WISA Woodsat will be launched to space from New Zealand using Rocket Lab’s Electron rocket. The mission is exploring the behavior of plywood in space for a period of two years. The countdown to WISA Woodsat’s launch can be followed on the mission website wisawoodsat.space and in social media channels with the handles @wisawoodsat and #wisawoodsat.

Pictures and video for media: https://materialhub.upm.com/l/bH9_mdR7TTTB

UPM Plywood
UPM Plywood offers high quality WISA® plywood and veneer products for construction, vehicle flooring, LNG shipbuilding, parquet manufacturing and other industrial applications. In 2020 UPM Plywood sales was EUR 400 million and it had 2,100 employees. UPM has five plywood mills and one veneer mill in Finland as well as plywood mills in Russia and Estonia. – www.wisaplywood.com

WISA, WISA WOODSAT and WOODSAT are trademarks of UPM Plywood.

UPM
We deliver renewable and responsible solutions and innovate for a future beyond fossils across six business areas: UPM Biorefining, UPM Energy, UPM Raflatac, UPM Specialty Papers, UPM Communication Papers and UPM Plywood. As the industry leader in responsibility we are committed to the UN Business Ambition for 1.5°C and the science-based targets to mitigate climate change. We employ 18,000 people worldwide and our annual sales are approximately EUR 8.6 billion. Our shares are listed on Nasdaq Helsinki Ltd. UPM Biofore – Beyond fossils. www.upm.com
Follow UPM on Twitter | LinkedIn | Facebook | YouTube | Instagram | #UPM #biofore #beyondfossils

Arctic Astronautics
Arctic Astronautics is a start-up from Finland, which has created the Kitsat educational satellite and the related STEM teaching material package. Kitsat is a fully functional one-unit CubeSat, specifically made for educational use with earthly components. It can be also used for stratospheric flights or easily upgraded with space-qualified parts into a qualified satellite, as demonstrated with WISA Woodsat(TM). Arctic Astronautics graduated from the European Space Agency's Business Incubation Center in Finland in 2020. – www.arcticastronautics.fi

Heureka Science Centre
Heureka, the Finnish Science Centre, is a lively hands-on exhibition and activity centre for all ages and among Finland’s most popular leisure time destinations. Heureka opened to the public on April 28, 1989 and attracts nowadays on the average 300 000 visitors a year. Heureka has four exhibition halls for interactive exhibits and a planetarium. Everything works in three languages: English, Finnish and Swedish, partly also in Russian and Estonian. Heureka is located in the Helsinki metropolitan area, in city of Vantaa, Tikkurila, and it is open around the year. - www.heureka.fi

Huld
Huld is a European technology design house with experience from the space industry since 1989. It is now also reaching out to the New Space industry combining software and testing knowhow with tailor-made additive manufacturing mechanisms and out-of-the-box thinking. Huld provides the additively manufactured deployable camera boom and related structures for the mission. – huld.io